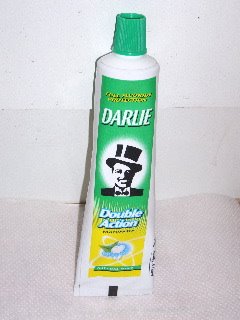 This brand of toothpaste used to be called DARKIE.
You don't get many black men sporting top hats and bow ties round our way, but still . . . . . .


.
Posted by John Lillie at 9:35 pm No comments: Links to this post

After two days, non stop : Bed.
Posted by John Lillie at 4:46 pm No comments: Links to this post

#26 Six days round the East Cape

As we are in New Zealand, me and Ken have put on our loin cloths, had our bodies tattooed and undergone tongue enlargements in order to perform the Haka as a prelude to our round the East Cape bike ride. Somehow the pics got deleted, so you’ll just have to imagine it!

Chanting over, we load bikes into car and drive for three hours to Gisborne where the car is left with one of Ken’s mates. Ken gets on his very old and decrepit yellow Rock Hopper and I’ve borrowed a Specialized Stumpjumper from the local bike shop and fitted it with slicks as the route should be all tarmac.

We start off on our six day, 500k trip and immediately stop at kilometre seven for coffee and carrot cake. This all seems pretty easy, I might even enjoy this! Cake digested we head off on route 2 through rich farm lands; orchards, soft fruit farms, vineyards, maize fields – an abundance of all sorts of food. The first 50k is dead flat, then a nice sharp climb which I flew up, down the other side and then a long steady rise to our stage end at a pub in Matawai.

However, a little way into this last 20k I got hunger knock, big time. Hungry, light headed, cramps, knackered. It got cold and started to rain. Ken came up and gave me a banana as he rode by, and I grovelled on, fortunately not too far to the tavern where we scoffed huge plates of steak and chips with fried eggs on top. Much better now, thank you.

Stage 2 to oPOTiki
This was supposed to be an easy day. The road continued to climb from the pub till we reached its summit at 725m then it was all downhill through the stunningly beautiful 50k long Waiutami gorge. I couldn’t get comfortable. Still tired from yesterday I was suffering saddle soreness. I was up and down all over the bike trying to get ride easily. Moaning and groaning (not always silently) we inched down to Opotiki.

The scenery, however, was spectacular. Riding on a mainly smooth, gently curving, mostly downhill road next to the Waiutami river. The sides of the gorge, rising steeply either side, were covered with trees, gorse, grass and various other types of vegetation of the green variety. There was very little traffic, some cars, more often huge American Mac trucks pulling equally huge trailers filled up with even bigger tree trunks. Logging is a very big industry round here. We got to Opotiki, then continued another 7k up highway 35 to Tirohaunga Motor Camp. 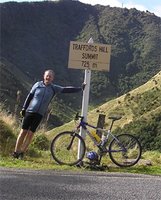 Stage 3 Opotiki to Te Keha
Relatively short day, 3 hours 45 min, average speed 17kph. One ‘orrible hill. Mostly riding by the sea and as its Easter, very little traffic. I have noticed that riding here is harder than in Europe - the road surface is not a nice smooth tarmac but big stones buried in asphalt. Once again the scenery is spectacular. Bays and coves, big empty beaches with nobody about. Anywhere in Europe the beacheslike these would be banged out with day trippers but here they are deserted (see pic of deserted beach). 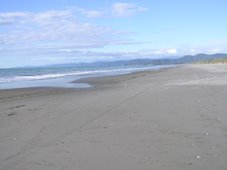 Stage 4 Te Keha to Hicks Bay.
Even more spectacular riding round the coast, more beautiful bays, more quiet coves, more sand, more sky and even less people. We stopped for coffee at Pacific Coast Macadamias (www.macanuts.co.nz) . They serve macadamia products; macadamia fruit cake, macadamia apricot cake, macadamia short cake, macadamia cookies, snack bars (with macadamias), macadamias in honey, macadamias on their own - in fact they are nuts! about macadamias. The final 30k of the ride went inland, and we up & down and up & down until arriving at Hicks Bay and another nice hill up to the Hicks Bay Motel. 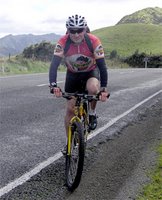 Stage 5 Hicks Bay to Tokomaru Bay
Those of you with a frail disposition, look away now.
(Winging Pom begins)
Horrible!
Hard, Ugly, Nasty, Difficult, Ugh.
Granny ring was engaged, after the first flat 10k, for four climbs of Himalayian proportions. These hills just went up and up and up (and sometimes a little bit down) and round every hidden bend was not the much needed summit but another (steeper) bit. Apparently we did over 1000m climbing in the first 40 of the 96 k stage. Madre Mia!

I was @#%* ed. I didn’t realise that carrying my spare kit in a back pack would be so much more uncomfortable than in a handlebar or saddle bag. Anyway, the weight on my back made the saddle even harder. I stopped half way and put on an extra pare of shorts which was a little more comforting in the end . . . . .
(Winging Pom ends).

Arrived at very nice b&b. Walked down the beach to local pub and ate fish and chips and drank a glass of beer - much better. Then we had convivial chat with four ladies from the Manakau Vets Cycling Club who were also riding our way (but on lovely carbon road bikes and with a back up car). We invited them back to our place for coffee and cake and managed to pursued them to take our bags for us on the last day to Gisborne. Hurray! 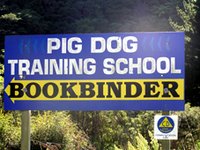 Stage 6 Tokomaru Bay to Gizy.
The ladies of the road took our stuff and sped off, we also rode at a respectable pace sans baggage in fact todays average speed lept from a normal 17 kph to 21 kph. 45k later met up with the racing ladies at Cottles Cafe in Tolaga Bay. I had a bowl of spicy fish chowder with my coffee - at 11am which was a bit strange.

Off for the final 40k to Gizy, we were overtaken by the ladies, who had stayed for some sightseeing in Tolaga. Their bikes could even freewheel downhill faster than us on our mountain bikes - so the moral of that story is . . . . . . .

. . . . . . . .and finally to Gisborne and a big ice cream - thank you Ken. Six days of biking, five very good and one a bit of a blur. We were very lucky having good weather, every day warm and sunny (except a bit of the first afternoon). Very little commercial traffic, as we did the most of the ride over the Easter holiday period and the East Cape is so sparsely populated anyway that regular traffic was light. All in all, good fun was had by all.
Posted by John Lillie at 11:42 pm No comments: Links to this post

Sally and Jenny have come to visit us in Napier. They have been all over the South Island. Tuesday they go to Taramasomthing and then off to Fiji.

pictured: Sally, Katie and Jenny. No sorry, Jenny, Katie and Sally. No, on the right is Sally . . . er . . well, anyway, Ken's daughter, Katie is definitely in the middle!
Posted by John Lillie at 7:39 am No comments: Links to this post 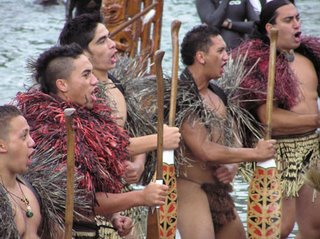 Posted by John Lillie at 1:12 am No comments: Links to this post 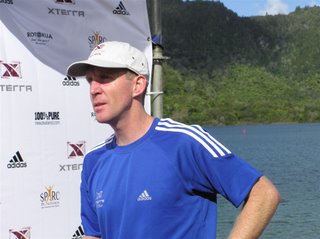 Ken had an assignment to commentate at an off road triathlon in Rotorua, put on by Frank Clark (pic above) and Roger Mortimer. I first met Frank about ten years ago when he was a triathlete racing on the Iron Tour in France. Now he is a full time race organiser putting on triathlons and duathlons around New Zealand. When we arrived it turned out that their regular photographer was not available and would I like to fill in? Well I thought I aught to show willing as I had free hotel and board for three days – so yes, OK. 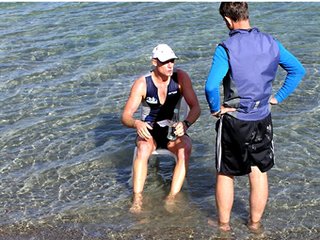 One draw back – my cameras were in Spain. I borrowed Ken’s small digital and put a call into Tracey Brick and she managed to send over her Canon eos300, so I was in business. I must say it was a bit weird walking round without my macho, big lense cameras and more importantly my photographer’s jacket. This jacket is like a special uniform that lets everyone know you are a ‘real’ photographer. However, working under the duress of being jacketless I took a few snaps – quite like old triathlon reporting times, really (I told you I was going back in time).

I am now famous in New Zealand as I was on national tv for a microsecond when the event was shown on the evening’s sports report. And, next day the Sunday Star Times, NZ’s only national newspaper, used one of my pics and gave me a credit (maybe I should take this up as a living?). So, all in all, good fun was had by all.
Posted by John Lillie at 2:25 am No comments: Links to this post

Monday 3 April
Played squash with Mudge, a mate of Ken’s (will be stiff tomorrow)

Sunday: weather changed, wet and wet. Sadly departed the Brick household and went to Mission Bay to catch up with Ken Maclaren who was commentating at local triathlon. 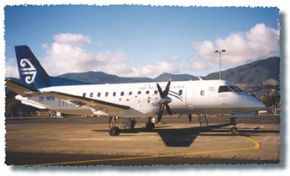 That done we went off to Auckland airport to fly to Napier. Ahh! The plane has propellers! Captain comes through wearing leather flying jacket, leather helmet, goggles, silk scarf and sporting gigantic handlebar moustache. Chocks away! And we are airborne. No bandits at 3 o’clock, Jerry must be having a day off. What Ho! As we landed in Napier, no prangs, tailspins or loop the loops. Everything in apple pie order.

Back to Ken’s place, am sending this blog report via modem connection – could I be going back in time? - Let me think - (as I spark up a ciggie).
Posted by John Lillie at 10:46 pm 2 comments: Links to this post

We went into town to visit the theatre and sample a bowl of noodles. Both very good and entertaining. The play was Doubt the story of a mother superior, head of a religious school, and her obsession with driving out a priest who she suspects to be 'interfering' with one of the boys. But - here is the punchline - we find that, at the end, she has . . . . Doubts! Heavy, man.

Recently have seen Capote, quite liked that. Munich, not so much. I'm re-reading On the Road by Jack Kerouac and I'm digging it ;-)
Posted by John Lillie at 3:42 am No comments: Links to this post