As I survived my trans Iberia bike ride (and the Tour de France is on the telly) I got in a real cycling mode and bought some bike books via Amazon. 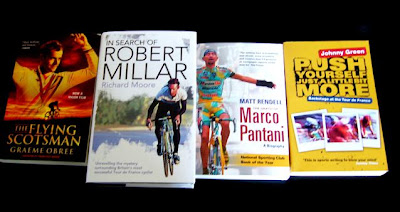 I wanted to like Robert Millar, I wanted to like his independence, his contempt for authority, his tenacity in the face of opposition . . . . . . but . . . . he also seems to be a rude, impolite, thoughtless prick. So, I didn't warm to him, I wouldn't want to meet him and I wouldn't re-read this book.

Marco Pantani has a similar aura to Millar. He was painted as the "devil may care pirate". Drugs elevated him to the podium - then he died - story ends. Sadly there is not a book's worth of interest or enjoyment here.

The third nutcase, Graeme Obree, is welcome round our house any time. Although as crazy as the other two (and he's got the certificate to prove it) he doesn't embark on a life of cycling with any devious intent to raise his profile. Chapeau!

Push Yourself a Little Bit More - backstage at the Tour de France by Johnny Green is a book I liked, mainly for Green's enthusiasm. The story is of a three week road trip running parallel with the Tour. Although he tries to be the "diamond geezer who's seen it all" he still writes about the race with affection and humour.
Posted by John Lillie at 1:12 pm No comments: Links to this post