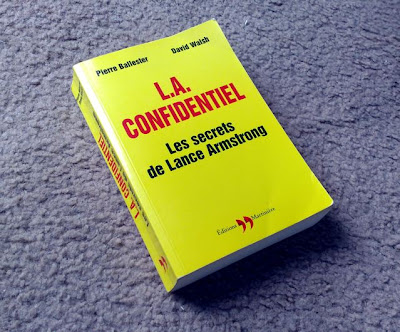 A paper back book (in French) detailing the alleged drug regime of Lance Armstrong before being struck down with cancer and his recovery and subsequent return to bike racing.

I'm glad none of my children wanted to become pro bike riders, the amount of 'medical' intervention available today is so sophisticated it's frightening.
Posted by John Lillie at 5:44 pm No comments: Links to this post

Back in the 1980's I had a business importing dairy products from Normandy. I bought a 7.5 tonne refrigerated truck and most Friday nights I would drive from London to Poole and take a night sailing on Truckline Ferries across the Channel to Cherbourg. Next morning, drive to the dairy, load up with cheese and come back on the Saturday evening sailing.

The boss of one of my suppliers was quite a bon viveur and he would often invite me to lunch - if I came over with the whole family he would insist on it. We would go to a really nice restaurant in nearby Valognes called L'Agriculture. The food was so nice, the ambiance so typically French and the welcome so warm that it became our restaurant with which to compare all other restaurants. Quite often the opinion would be, "Good - but not as good as the Agriculture!"

L'Agriculture is still there - and it hasn't changed a bit. Even one of the serveuse is still employed to wait at table - though she is no longer a fresh faced 17 year old! The decor is the same and the food is still really good French country fare. They used to have a fish tank in the hall where the lobsters lived and you would choose your lunch before sitting down. Nowadays it only houses tropical fish - not for eating ( . . . . . at least, I don't think so). 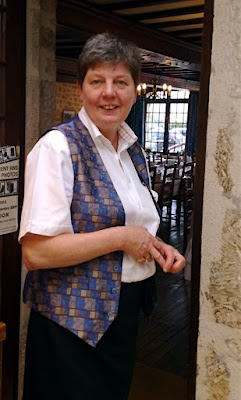 As well as dairy products, Normandy is also famous for its apple brandy, called Calvados. Occasionally I would buy a bottle to take home. In those days there was a limit to the amount of duty free wine and/or spirits (but not beer or cider) you could import without paying onerous customs duties. I bought my Calva from a little family run business that made their own produce on their farm from their own apples. Sometimes they would give me my Calva in a used beer bottle. I supposed they were trying to save money on the packaging. . . . . . . .
Posted by John Lillie at 5:40 pm No comments: Links to this post

We took a holiday from our holiday.

We went 150km south by train from Cherbourg to Argentan, then rode to Bagnoles de l'Orne. Next day we visited a friend of a friend and stopped the second night in Briouze. Third day back to Argentan and trained back to Cherbourg.

We rode about 200km round Bagnoles - the area is called Swiss Normandy and is hilly and forested and pretty flowers decorate wooden houses, very much like Switzerland (although I couldn't spend my 1 Swiss Franc that I have left over from Leysin).

Riding back out of Cherbourg I espied a shop making umbrellas - could this be the inspiration for the 1964 art house French film Les Parapluis de Cherbourg? 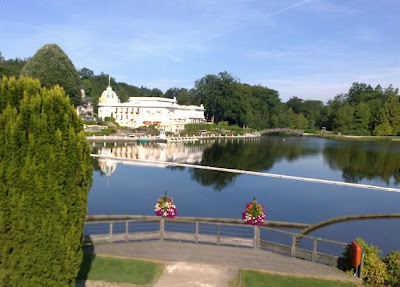 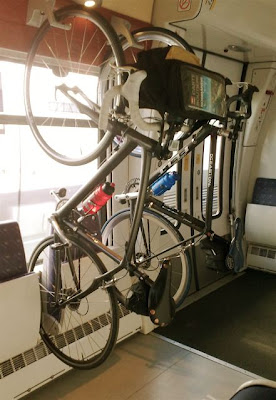 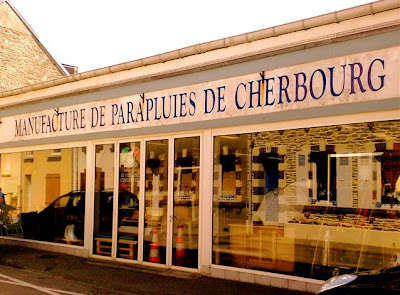 Posted by John Lillie at 6:17 pm No comments: Links to this post

Ryan, Kevin and Lorraine paid us a visit at our campsite. We went for a walk on the beach. If you wonder why we are all wearing several layers of clothes - it's because it's not as warm as it should be:-( 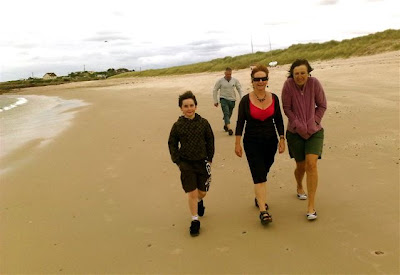 Posted by John Lillie at 3:42 pm No comments: Links to this post 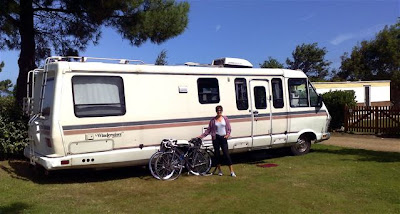 Of course when one's camping one needs a bedroom with a double bed and a bathroom with a shower and flushing toilet and wash basin and a nice big mirror.

It goes without saying that the kitchen has to be equipped with a micro wave, the capacious fridge has to have a deep freeze section, an oven with four burner gas hob, a double sink with sufficient hot water to do the dishes (I have to admit - no dishwasher!).

When roughing-it in the country it does help to have fitted carpets and plenty of storage space and a nice big wardrobe. Just in case it gets chilly it's good to know there is a central heating system and and for those days that are just too hot, two air conditioning units - one up front for the driver and a a slightly more powerful cooler for the house.

A few comfortable armchairs plus a four seater banquette at which to dine (convertible to another double bed) and an extra single bed (for the staff) and camping becomes almost acceptable ;-)

No WiFi on our campsite so a short trip to a local bar where the nice lady in the bar Le Tot de Bas gave me her password to log-on. We had to pay for the baguette, beer and paté but a sniff from the little dog under the table was free.
Posted by John Lillie at 2:38 pm No comments: Links to this post