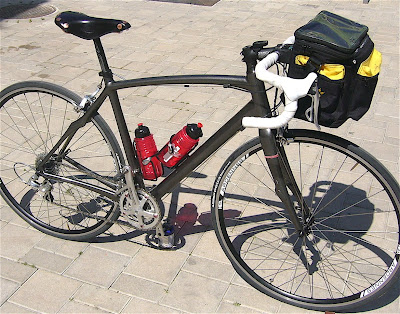 My Specialized Roubaix back from the paint shop.
Rebuilt as an even longer distance touring bike with: 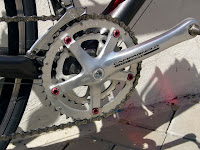 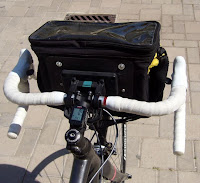 Posted by John Lillie at 4:03 pm No comments: Links to this post 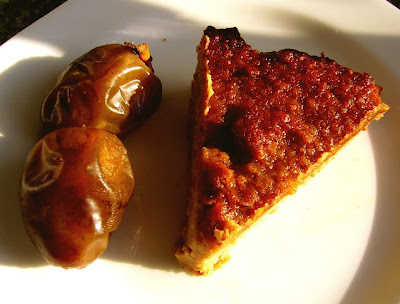 Sally bought half a kilo of dates but as it was the end of market day the lady gave her a kilo for the same price :-) We ate a few, they were really ripe and wouldn't last much longer (no going out of date jokes here - too obvious).

Anyway, I got creative and made a primal Date & Walnut Cake (no extra carbs from flour or sugar like all the recipes tell you) and it turned out OK!

I peeled and stoned the dates, had about 250 grams of pulp. Using a food processor I blended in crushed Walnuts and ground Almonds, in total about 250 grams. Then slowly added 2 beaten eggs mixed with some sour cream and a teaspoon and a half of baking powder.

Put in a dish lined with baking foil and cooked in the 220c degree oven for 25 minutes.

Voila!
Posted by John Lillie at 9:09 am No comments: Links to this post

We watched a *fairly* interesting (bit long, if the truth be told) documentary about Baroness Pannonica Rothschild. She was a white, Jewish, baroness who befriended various bebop jazz musicians, like Thelonius Monk and Charly Parker, back in the days of black & white film.

Poor Thelonius suffered with a bipolar mental condition but, more interestingly, it seems the whole Rothchild family was also a bit nutty.

There has been a series on BBC tv by Alan Whicker, looking back over 50 years of his reporting from the four corners of the world. He revisits and re-interviews people from his old programmes.

The plastic surgeon and his (same) wife have moved from California to Florida, the 13 year old bride in Bali has grown up, but for some reason Alan Whicker didn't choose to go back to Haiti and talk to the Tonton Macoutes again - bit too dangerous, apparently.

I think you might call Alan Whicker debonair. Not really fashionable to be debonair these days, is it? Bring Back Debonair is what I say! 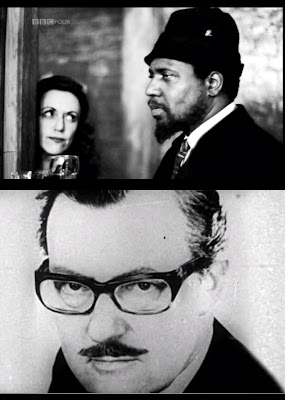 Posted by John Lillie at 2:36 pm No comments: Links to this post

Gomorrah is brilliantly brutal and believable (and Italian).
Cadillac Records; much too clean, beautiful, handsome, well dressed and shiny to be true. Same for Fear and Loathing in Las Vegas - Johnny Depp plays a pretty Raol Duke /Hunter S Thompson - and he wasn't, was he?

Posted by John Lillie at 9:04 pm No comments: Links to this post

Our friend Wendy came to visit. We went with Javi y Chello for paella at Marino - Las Rotas. Can you think of a more pleasant way to have Sunday lunch? 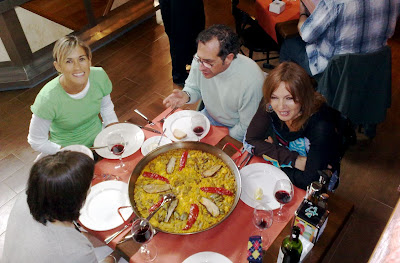 Posted by John Lillie at 6:24 pm No comments: Links to this post

I've had my Specialized Langster Highbury (see #200) resprayed.
Here it is: 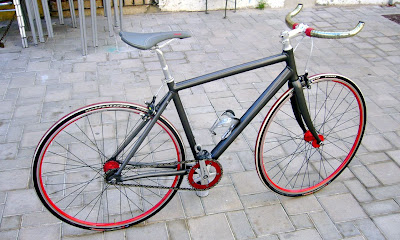 Posted by John Lillie at 3:56 pm No comments: Links to this post 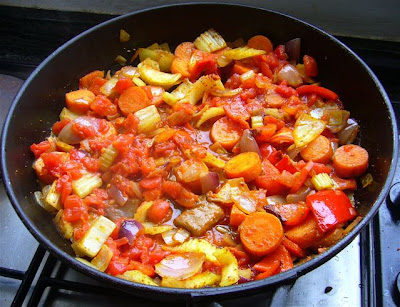 Basic Red Sauce; can be used without adding stock in meat dishes or pastas, or blended with stock in fish stews and also as a Souper Soup.

Sweated vegetables: In a frying pan with a lid, gently cook in olive oil; carrots, red onions, celery, red peppers, some garlic. Add salt and pepper, crushed coriander and paprika. Then add a tin of chopped tomatoes and a spoon or two of orange juice and a drop of balsamic vinegar, or red wine.

1.Cook till soft. 2. Add some stock. 3. Blend in a blender. 4.Push through a sieve. The sieving gets ride of the fiberous bits and leaves a nice homogenised soup.

When used in #187 Bouilliabaisse recipe add a final touch - a capful of Pernod.
Posted by John Lillie at 10:37 am No comments: Links to this post